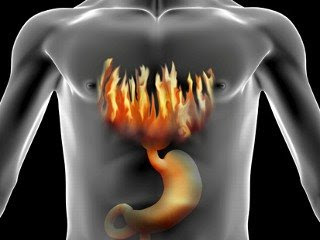 I was admitted to a private hospital last Saturday after feeling some chest discomfort for days giving me sleepless night what I thought to be connected to some heart problem. But after going through a series of test and some ugly moments here , I was diagnosed as suffering from GERD which stands for Gastroesophageal reflux disease. Been reading up a lot about this ailment as this is my first time experiencing it. So this is what it is......

Gastroesophageal reflux disease, or GERD, occurs when the lower esophageal sphincter (LES) does not close properly and stomach contents leak back, or reflux, into the esophagus. The LES is a ring of muscle at the bottom of the esophagus that acts like a valve between the esophagus and stomach. The esophagus carries food from the mouth to the stomach.

When refluxed stomach acid touches the lining of the esophagus, it causes a burning sensation in the chest or throat called heartburn. The fluid may even be tasted in the back of the mouth, and this is called acid indigestion. Occasional heartburn is common but does not necessarily mean one has GERD. Heartburn that occurs more than twice a week may be considered GERD, and it can eventually lead to more serious health problems.
Anyone, including infants, children, and pregnant women, can have GERD.

I do not know what causes it. It might be due to the food I take or my arthritis medication or my hormone replacement therapy. The symptoms may include these......
*Persistent heartburn and acid regurgitation.
These are the main symptoms GERD, though some people have GERD without heartburn. Symptoms of heartburn include:
*A burning feeling starts in the chest just behind the breastbone (the sternum) that occurs after eating and can last a few minutes to several hours.
* Lying down and bending over often makes symptoms worse.
* Symptoms are often made worse by eating food.
*Burning in the throat.

*Sour or bitter taste in the mouth.
*Swallowing can be difficult.
*Belching (I had a lot of this)
*Chronic coughing
*Hoarseness

*Loss of voice for no apparent reason

*Wheezing or other asthma-like symptoms

*An antacid usually provides relief
*If an infant spits up or throws up almost every time he eats and seems fussy, the infant may have gastric reflux

*Pain in the chest

*Hoarseness in the morning

*May feel like food is stuck in the throat

For care and treatment I look up here. I am now on medication and hopefully I pray that I will get better in a few weeks. Those who have gone through this ailment are welcome to share their trauma here.

Little Corner of Mine said...

Oh dear, I hope you are feeling better and get well soon with the medication.

Hope u get well soon

Thanks Johnny for your prayers. Looking forward to all the nice food I am missing now.

Little Corner of Mine- I will have to be careful with my diet from now on til I am well.

Olive oly - Thanks, and please pray for my speedy recovery.

Hope you are feeling better.
That is terrible, not able to speak and have difficulty swallowing? You are probably going to lose weight. :(

Eastcoastlife - Luckily I can still speak and swallow but I eat less now for easy digestion. Will see how it goes with the medication in few more weeks.

sorry to hear that:( hope you get better now..Take care and take plenty of rest..

Hope you get well soon. Less oily foods, less meats, more vege, fruits, fish should be good for you, eh?

Newer Post Older Post Home
Subscribe to: Post Comments (Atom)
“One of the very nicest things about life is the way we must regularly stop whatever it is we are doing and devote our attention to eating.”
- Luciano Pavarotti

Someone making the best of what life has to offer..accepting her painful days...while enjoying people, places, music and good food...

I Have Rheumatoid Arthritis

Being deeply loved by someone gives you strength, while loving someone deeply gives you courage.

Life is the art of drawing without an eraser.

All life is an experiment. The more experiments you make the better.

It is not length of life, but depth of life that matters.

Verse of The Day

Add Snippets to your site